Since 24th February in solidarity with Ukraine international companies are ceasing work with Russia and Belarus. Leading world companies in the iGaming industry around the world withdrew betting campaigns on Russian sports events, ceased operations and suspended all business partnerships with bookmakers in the Russian Federation.

We publish a full list of companies that have left the Russian market.

As of 26 March, Parimatch has stopped any of its software from being accessible in Russia. And following all necessary legal proceedings regarding its technical solutions, the Parimatch franchise has left the Russian market on a permanent basis.

As a consequence, Russia is now banned from using the Parimatch advertising materials, symbols, colours, global ambassadors and slogans. In addition, Parimatch branding is prohibited for use by all local ambassadors, while all Parimatch tech solutions are now inoperational in Russia.

Leading online sports betting company bet365 ceased all operations on Russian territory after new account registrations and new deposits had already stopped being accepted. The operator’s Russian customers were able to cash out any funds from their accounts until March 15. bet365 also asked its partners to stop using any of its brand identification and marketing elements for promotion in Russia.

The online poker giant PokerStars is joining a growing list of major companies in suspending operations in Russia. PokerStars sent out a brief tweet announcing the decision on 9th March.

888poker and GGPoker have joined PokerStars in the withdrawal of all services from players based in Russia.

There was no official announcement from GGPoker but it has been reported that all players based in Russia received an email issuing forewarning of a withdrawal of service and time to withdraw all funds. 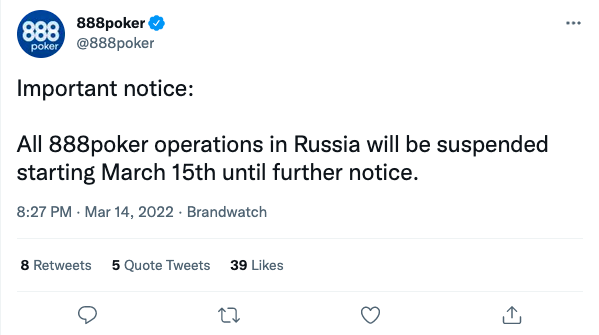 Greece’s biggest gaming firm OPAP halted betting on Russian sports events. OPAP said it has stopped offering betting on any match related to Russian competitions, including football, basketball, and volleyball, either online or through its outlets in Greece.

Coolbet has decided to stop offering betting on any Russian or Belorusian events including the NHL.

Statscore, a sports data company from Poland announced that it would no longer supply sports updates and statistics from sports tournaments held in Russia and Belarus. 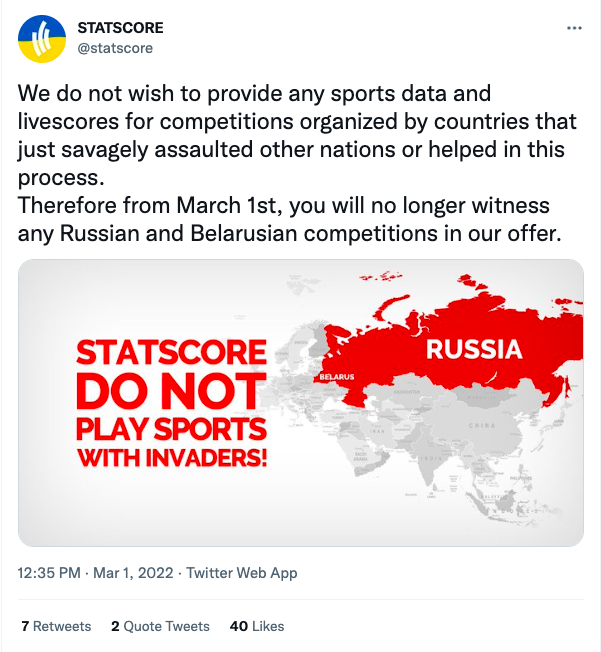 Online gambling operator LeoVegas has announced that it is suspending all betting on domestic Russian and Belarusian sports.

FanDuel has indefinitely suspended all betting markets on sports leagues and events held or connected to Russia and Belarus including:

The decision to suspend these markets was made in support of global sanctions levied against Russia and Belarus.

Aristocrat Leisure Limited has suspended operations in Russia. Aristocrat normally has approximately 1,000 people working for business units within its Pixel United organisation in Ukraine. The company will suspend its mobile games in Russia, which have historically contributed approximately 3% of total annualised Pixel United bookings.

Headquartered in Melbourne, though with a significant US presence, PointsBet published a tweet, announcing that it was pulling all support for sporting events in Russia and Belarus, including the Kontinental Hockey League (KHL).

“Effective immediately, PointsBet is no longer accepting bets or posting lines for Russian and Belarus-based professional sports leagues and events, including all KHL events.”

DraftKings opted for a similar course of action, posting a statement on Twitter which read: “We will no longer offer betting on sports leagues and events in Russia and Belarus, such as the KHL.

“DraftKings has no direct commercial relationship with any Russian or Belarusian league, team or sports organisation.

“Our Customer Experience team is prepared to answer questions from any customers impacted by this change.” 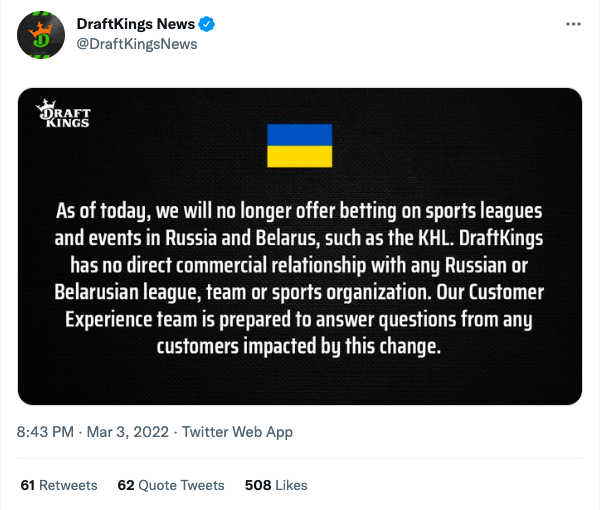 Genius Sports has confirmed that it will no longer continue commercial operations in Russia and Belarus, as a result of the ongoing conflict in Ukraine.

“Genius Sports confirms that as a result of the events in Ukraine we are ceasing all commercial operations in Russia and Belarus,” the statement read. 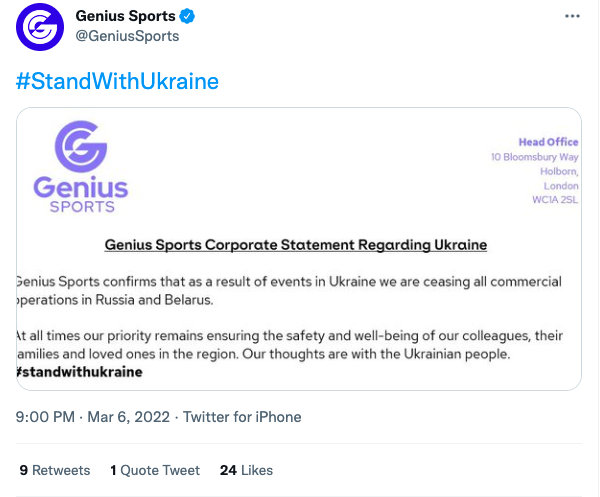 William Hill players from Russia and Belarus are reportedly unable to log into their accounts. At the moment, the company’s support service is also not working.

In turn, the Scandinavian Guts Poker service has notified users that access to games and deposits has been disabled since February 28. And by March 11, they needed to withdraw all funds from the poker room.

NetBet clients received a similar message — they also cannot log in to the poker room, and the company offers to contact the support service to withdraw funds.

Officially, none of the companies names the reasons for stopping their work. However, several gambling businesses have also interrupted their functioning in Belarus and Russia due to the latter’s military actions on the territory of Ukraine.

On March 31 the Ukrainian Commission for Regulation of Gambling and Lotteries (CRGL) urges the companies to halt any partnership or business relations with Russia, to terminate relations with all Russian customers and partners, including the supply of products, technical support, and service by the company or by any other of their subsidiaries in Russia: Betradar, Betgenius, Lsports, Донбест, ExeFeed, Goalserve, Pinnacle Sports, Betfair, Betable, eOddsmaker, Sportsdata, Running Ball, RTSmunity, Genius Sports, Sportradar, Greentube, NetEnt, Novomatic, Firma ABC International, Digitain, SBTech, BetConstruct etc.