Greece, located in Southern Europe, has a population of almost 11 million people. The first gambling establishments appeared in the country at the beginning of the 20th century, and almost all types of gambling are currently allowed. However, the progress seen in the gambling industry there only began very recently, with the Greece government having to develop the industry because of the difficult economic situation they found themselves in a few years ago. Greece saw a way to increase tourism by trying to attract people interested in gambling.

The Gambling Supervision and Control Commission oversees the regulation of gambling establishments; the basic rules for the provision of such services are described in Law 4002/2011. Currently, there are 9 legal casinos operating in Greece. All of them are located in resort areas and are aimed at foreign visitors.

The largest operator of lottery betting and sweepstakes in the country is OPAP SA. The company operates 35 thousand licensed gaming machines for offline entertainment, and the license only expires in 2030.

The legalization of online gambling in the country took place only in 2011, and now this market segment is completely dominated by the OPAP SA. Even though this monopoly was declared illegal by the European Court, the company continues to dominate the market. The good news is that new regulations are expected soon, which will finally equalize the rights for all operators in the country.

According to the law 4002/2011, poker, online betting, slot machines and lotteries are legal in Greece. However, it is allowed to play only in official establishments; players who disregard the rule will face severe punishment and is a criminal offence. Anyone wanting to gamble must receive a so-called “personal player card” and be at least 21 years old.

Licenses are issued by the Gambling Supervision and Control Commission. It consists of 9 members, of which at least half must be replaced every two years.

After gambling became legal again in 2011, all Greek operators wishing to provide their services online must have their own website, with the name ending in “gr.”

After legalization, the state issued 24 temporary licenses to various operators, but soon this project was suspended due to the development of a new licensing system. As a result, today OPAP has a monopoly on the provision of online entertainment, but this situation is to change soon and the market will be open to other operators. The cost of the license for online operators will be about three million euros and will be valid for 5 years. All Greek online casino operators will have to pay a flat tax to the state budget of 35 percent of their income, according to EU requirements.

Greece is also among the first to develop gambling software – Intralot is one of the world’s leading suppliers of integrated gaming systems.

The following graph shows the revenues of licensed iGaming brands broken down by category. 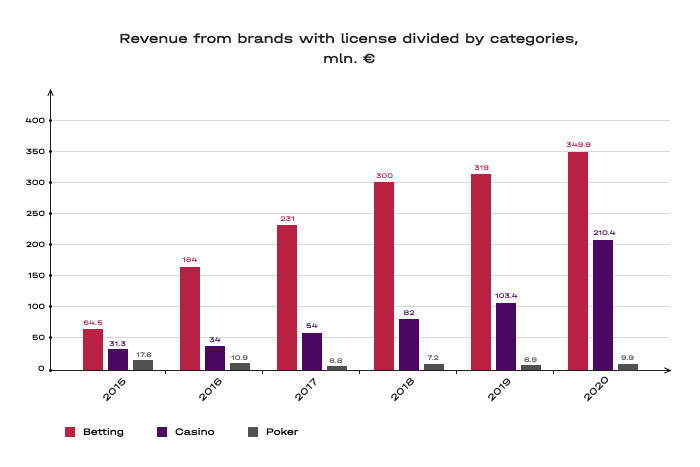 Social media such as Facebook, WhatsApp and Instagram remain the main sources of traffic in Greece. Facebook, for example, is used by almost 60 percent of the population, half of whom are between the ages of 25 and 54.

With the authorities hoping to bring in new legislation, other operators, including foreign ones, are looking to move into this market in the not too distant future.